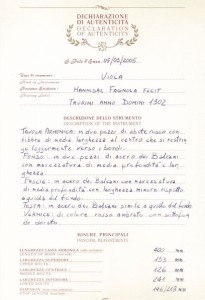 Fagnola considered himself to be a self-taught maker. But although he worked on his own very soon after taking up violin making, he still collaborated with Rinaldi and was in regular contact with Rinaldi’s assistants, Evasio Guerra and Carlo Giuseppe Oddone. He made instruments based mainly on models from the Turin school.
In his first period (until around 1905), Fagnola produced a number of instruments based on Rocca and Pressenda models which appear as fine copies, sometimes covered with a beautiful, rich, soft red varnish, and which have a slightly antiqued look. He subsequently dedicated himself more to classic Cremonese models, which he considered more suitable for the international exhibitions that he entered in Genoa and Milan in 1906, and in Turin in 1911, where he gained international recognition.
Fagnola trained Riccardo Genovese, Stefano Vittorio Fasciolo and his nephew Anibalotto Fagnola, and he died in Turin in 1939.